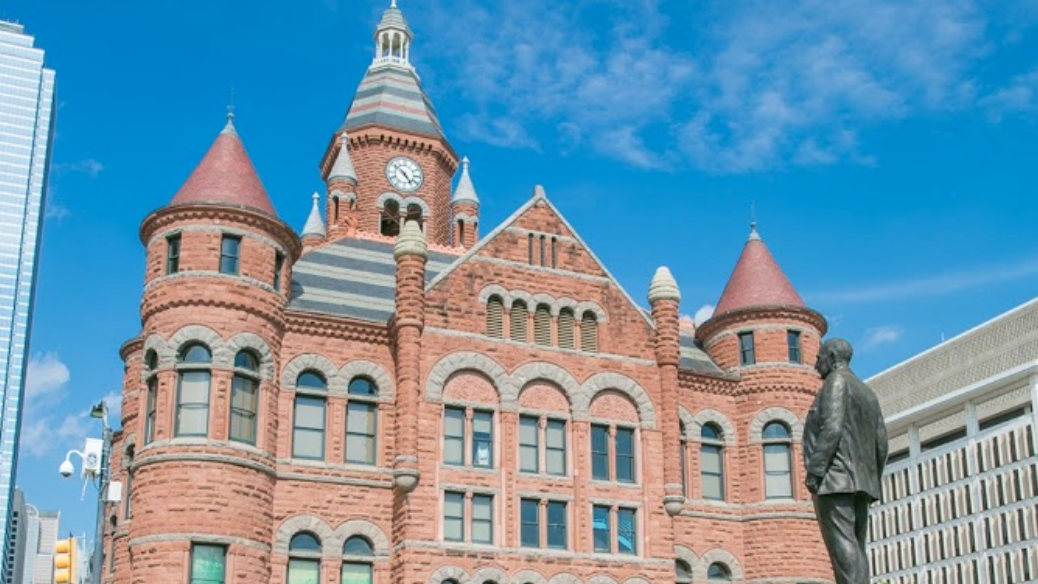 Classic meets contemporary in the heart of Dealey Plaza, as the Old Red Courthouse sits near the 70s era Reunion Tower. The Courthouse is a historic and impressive building drawing in people from all over the world.

The Old Red Courthouse “is the sixth consecutive courthouse to occupy this site. Considering the previous five courthouses located on that site had burnt to smithereens, Dallas county commissioners wanted something strong and formidable. The council had high expectations for this city on the edge of the frontier. Council members approved a quarter of a million dollars for the building in 1890 and saw it finished two years later. That was good timing, considering the economy took a dive in the Panic of 1893, the beginning of a four-year depression caused by the overbuilding of railroads and their shoddy financing.” – masonrymagazine.com

“The building was constructed of steel and stone, materials more able to withstand fire and similar to those Chicago used when rebuilding after its Great Fire of 1871. It contained columns of local granite and turrets stretching almost 120 feet into the Texas skies. Its original interior program was to have included six courtrooms, two libraries, twenty-nine county offices, ten restrooms, and two passenger elevators…

Typical of its highly textural architectural style, Old Red Courthouse bears a complicated composition that today looks like a geometrical extravaganza. Its massing, however, because of its symmetry, calms the visual smorgasbord. Locally quarried materials such as the Pecos red sandstone bricks and blocks give the exterior its hue, hence its moniker of Old Red. Its blue-grey masonry voussoirs— wedge-shaped stones— form a brow over large round arches separated by short columns, heavy masonry walls built of rough-faced squared stone. Gabled rooflines accentuate towers topped with conical roofs. – masonrymagazine.com

Beside the Old Red Courthouse, “In contrast with the 19th century Old Red is Fountain Place…The architects at Pei Cobb Freed & Partners designed a unique skyscraper to live within the surrounding plaza. Like a crystal growing from the surrounding landscape, the design expands upon the urban ideas of Mies van der Rohe’s Seagram Building in New York City, built three decades earlier. Built in 1986, the architectural style is in sharp contrast not only with the Old Red Museum Courthouse, but also with Pei’s earlier work at the Dallas City Hall. – thoughtco.com

The Museum: The Old Red Museum

Open daily from 9-5, “there is a special exhibit gallery on the first floor, while the second floor is filled with exhibits, 41-touch screen computers, an educational learning center and four mini theatres.” – visitdallas.org

for information go to: oldred.org

“The Old Red Museum is located at a crossroads of activity in downtown Dallas – adjacent to the JFK Memorial and Dealey Plaza, a National Historic Landmark District, across the street from a replica of Dallas founder John Neely Bryan’s cabin and just a block from The Sixth Floor Museum and the historic West End of Dallas.” – oldred.org