Opened in 1989 in the heart of the Dallas Arts District, Meyerson Symphony Center is an impressive building where music and architecture combine, providing a unique and powerful experience.

At Garcia Hubach we love sharing the gems that Dallas has to offer and the Meyerson Symphony Center is the best of the best.

A Call from the Community: Meyerson Symphony Center

“The Morton H. Meyerson Symphony Center was created as a response to the citizens of Dallas desiring a prominent facility for cultural activities and gatherings, and the Dallas Symphony Orchestra’s need for a new home. A public/private partnership ensued between the City of Dallas and the Dallas Symphony Association, which led efforts to raise a major portion of the needed funds. In September 1989 a new era in the cultural life of Dallas began with the opening of the Meyerson Symphony Center.” – dallasculture.org

“The architect, I.M.Pei, was at the height of his career when chosen as the design architect, even winning the 1983 Pritzker Architecture Prize while in the midst of this commission.” – ThoughtCo.com

“Pei often stacked simple, geometric shapes to create his buildings, lending them a crispness and monumentality – notably the Museum of Islamic Art and the Embassy of the People’s Republic of China in Washington. But with the Meyerson, Pei combined two shoe boxes, pivoted the top one – and thus both softened and complicated the building, gracing it with swirling windows and an airy, dazzling lobby that is an engineering feat, all of it secretly bolted together by a cross-beam and a hidden steel ring. – artandseek.org

“It’s considered one of the world’s best concert halls….It took nine years and $106 million to build, but there is not a bad seat in the house. Business Insider recently named it one of the top 10 in the world. IN. THE. WORLD. The construction of concert halls is a painstaking process that requires architectural design and acoustic science to converge perfectly. Acoustician Russell Johnson consulted and advised creating a modified “shoebox” shape, similar to the design of European concert halls, namely the Vienna Musikverein, which is generally considered the finest concert hall in the world.” – DallasObserver

As reporter Scott Cantrell states in the Dallas News, “Ultimately, a concert hall succeeds or fails on the basis of acoustics, and the Meyerson’s spectacular sonic success is thanks to an equal partnership between Pei and his colleagues and Artec Consultants, the acoustical-design firm headed by the late Russell Johnson. After too many modern concert halls had disappointed with dry, harsh sound, the Dallas community leaders who supervised the Meyerson project wanted more of the sonic warmth associated with venerable halls including Boston’s Symphony Hall, Vienna’s Musikverein and Amsterdam’s Concertgebouw.” – DallasNews.com 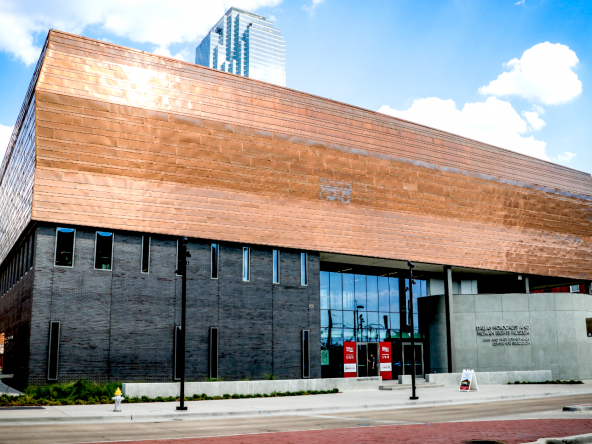 Rich in history, the Dallas Holocaust and Human Rights Museum is a vital center for the community,...
Continue reading